In 2009 several dogs in Devonport, Waiheke and Browns Bay were killed or became seriously unwell after having contact with sea slugs. For the first time local vets were presented with  dogs which had suddenly become extremely unwell after visiting the beach, and at least one dog died within about 30 minutes of eating or licking a slug. Most dogs developed signs within hours of playing at the beach.

After having contact with sea slugs most of the dogs vomited and became wobbly on their feet before they became so weak  they collapsed. Vets noticed that, despite the dogs distress, their heart rates actually slowed down and some developed cardiac arrhythmias. Some of the dogs also had diarrhoea, twitching of their muscles, seizures and respiratory failure before succumbing to the poison.

The common thread that vets noticed was most of the dogs had been to the beach and some had been seen licking, mouthing or eating sea slugs. Research was initiated and investigators at the Cawthron Institute found a neurotoxin, called tetrodotoxin (TTX) in both the slugs and the stomach contents of some of the affected dogs. Although TTX was known to occur overseas in other marine life such as puffer fish, crabs, ribbon worms and blue-ringed octopuses (or ‘octopi’ depending on where you went to school!) this was the first time TTX poisoning had been confirmed in New Zealand. It’s not known if the slugs produce the TTX themselves or, like puffer fish, the TTX is made by bacteria within the host. Like other marine toxins and venoms, TTX is very toxic. 1/2 a teaspoon of sea slug is thought to contain enough toxin to be lethal to a human.

So our unwitting villain in this case is the Grey Side-Gilled Sea Slug (GSGSS) with the scientific title of Pleurobranchaea maculata. It’s body is translucent grey with a rough looking back or ‘mantle.’ It has no shell and is active throughout the day. Large specimens grow up to only about 10cm so smaller slugs may go unnoticed by dog owners as they walk on the beach. The slug can live in rocky as well as sandy coastline habitats so the East Coast Bays are an ideal environment for them. We most commonly see them during summer and autumn. 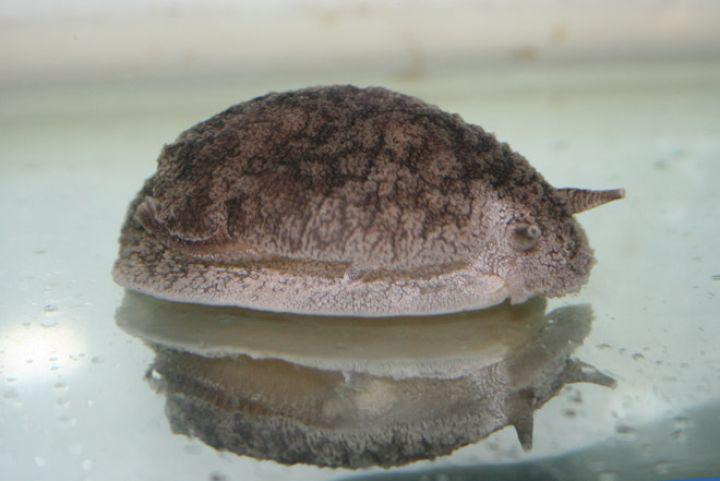 So, what should we do to protect our dogs? All of us are aware to watch out for and prevent our dogs picking up things on the beach like dead fish, crabs and rubbish because consuming rotten flesh causes food poisoning and objects like fishing hooks can have lethal consequences. The same goes for the GSGSS but we have to be more aware of slugs because they are small and easily missed among bits of drift wood, seaweed and, sadly, trash like fishing nets and plastics. We don’t know when or if the GSGSS will become toxic again, but we advise keeping your dog away from them if you can. Avoid touching the slugs and keep other people, especially children, away from them. If you know your dog has licked or consumed a slug then it is best to have it checked by a vet as soon as possible afterwards because TTX acts so rapidly.

We don’t wish to malign the grey side-gilled sea slug or sea slugs in general and suggest, like other potentially dangerous native species in New Zealand, just ‘going around’ them so they can play their important part in our natural ecosystems. Hats off to the researchers at the Cawthron Institute for their thorough and robust research into this disease, the knowledge of which is a benefit to us all. Including our dogs. Thanks!

Images thanks to the Cawthron Institute.