Elwood, a six year old male Labrador, was first brought to us to us while his owners were away. Thankfully, he was being looked after by very well chosen house-sitters. He presented with a lack of appetite, lethargy and vomiting.

After a full physical examination and blood tests (including a biochemistry panel and a heamatology panel to try and detect internal changes), Elwood was admitted into our clinic for further diagnostic tests and supportive treatment. He was placed on intravenous fluids in order to maintain a healthy blood pressure and replace the fluids he was losing from vomiting. A broad spectrum antibiotic was also administered intravenously and he received several injections of an anti-emetic (a medication to help with his nausea). 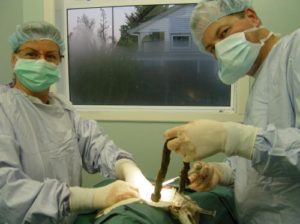 While Elwood was being stabilized and medicated, radiography equipment was being set up so an x-ray could be taken of Elwood’s abdomen. Multiple views were taken of the abdomen in order for all relevant antomy to be examined. The x-ray films were studied and our veterinarians, Cathy and Phil, were highly suspicious of a foreign body being present within the digestive tract. Due to this piece of evidence and Elwood’s clinical symptoms, permission was obtained from his caregivers for an emergency exploratory laparotomy (surgery to open up the abdomen temporarily) to be performed.

As surgery was speedily set up, a combination of analgesics (pain killers) was calculated specifically for Elwood and added to his intravenous fluid therapy. These strong analgesics were given to keep Elwood comfortable during the entire surgery and allow his body to cope. Complicated surgery like this causes stress on an animal’s body which can take the form of an altered heart rate & blood pressure; both of which can result in an unsafe anaesthetic. Providing accurately calculated pain killers that were infused constantly into his blood stream assisted in keeping him safe. Another aspect that kept him safe was the intensive anaesthetic monitoring he received. All of his vital signs were constantly measured, recorded and analysed in order to keep him at an adequate level of anaesthesia.

The exploratory laparotomy proceeded and revealed a mass in Elwood’s stomach, colon, caecum, intestines and subsequent intussusception of the intestines (the intestines had bunched up together in a similar way that a telescope folds up). Due to these findings, a series of complex procedures were performed. Firstly, a gastrotomy (opening in the stomach) was made and then two separate enterotomies (openings to the intestines) were performed. From these openings, it was discovered that the foreign body was a plaited fabric rope dog toy, the entirety of which was retrieved and then these incisions were sutured closed.

After the removal of the foreign body, the intussusception was reduced. A small section of the intestine had become necrotic (the tissue had ‘died’) due to lack of blood flow and so had to be removed. A 15cm section of the bowel also had to be removed and the two remaining parts be reconnected. All incision sites were then thoroughly flushed with a saline solution to wash away any debris. Elwood was in surgery for just under three hours with no complications. Two veterinarians worked together on the procedure while two nurses monitored or assisted where needed.

That night, staff members took it in turns to visit Elwood at the clinic every two hours in order to check his vital signs, ensure he was comfortable and administer any medications. These overnight visits were also made the next few nights due to the major nature of the surgery that Elwood went through.

Elwood spent most of the next day sleeping, being medicated, having his surgical site checked & cleaned and having his vitals measured every few hours. As Elwood became more alert, he was provided with lots of company and was able to be assisted out to the toilet. Gradually, Elwood was able to stand by himself and soon after that was able to walk short distances. Letting him have a sniff around the garden helped to improve his mood and stimulated his appetite. He was provided with a special diet that was introduced very slowly so as not to put stress on his digestive tract.

Elwood continued to improve and decided to take himself on short walks around our clinic to inspect his surroundings. With such fantastic improvement, Cathy and Phil were happy to discharge Elwood back to his loving family. After many revisits to check his progress and much care at home, Elwood was finally back to his old self.

It is extremely rewarding to end up with such a positive result after a lot of hard work. We became especially attached to Elwood and wish him and his family all the very best for the future.